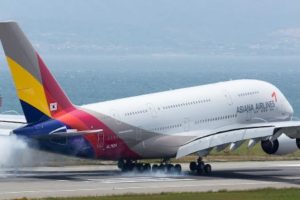 The plane of the South Korean airline fumed during the preparations for take-off, which caused returning and carrying out an emergency check. According to the Ministry of Transport of the Republic of Korea, the incident occurred yesterday – July 30 at 4:50 pm local time at the Incheon International Airport. The Asiana Airlines aircraft was scheduled to fly on the route Incheon-Jakarta. There were 302 people in the liner. Suddenly a white smoke poured from the tail of the plane, which caused the stopping procedure to takeoff.

Fire engines were urgently sent to the plane, but as a result, the smoke stopped.

Passengers and crew had to leave the plane by emergency. They were transferred to another aircraft of Asiana Airlines. As a result, the flight delayed by 1 hour and 15 minutes. The replacement aircraft completed the flight safely and landed in Jakarta.

The Ministry of Transport is now investigating the incident.

The incident was another blow to the prestige of Asiana Airlines, which recently found itself in a crisis due to the inability to provide boarding supplies.