A new astronomical project, the Hubble Asteroid Hunter,  allows volunteers to become asteroid hunters. Under that program, anyone can help astronomers search for asteroid clues in the Hubble Space Telescope images.

According to the Hubble website, search results will be used to calculate asteroid orbits, as well as to teach neural networks that work with an observatory data file.

In the Solar System, the asteroids are located mainly in the asteroid belt, which is between the orbits of Mars and Jupiter. To date, scientists have counted more than 700 thousand asteroids and this number is constantly growing.

A few years ago, observing very distant galaxies, the Hubble Space Telescope accidentally discovered several asteroids that are hundreds of millions of kilometers from our planet. These rocky bodies create curved or similar lines to the letter S in the photos. The number of these tracks in a single image reached 20.

In an attempt to understand that discovery, a team of astronomers, planetary scientists and software developers from the European Space Agency and other institutes launched the new Hubble Asteroid Hunter research project.

This mission is based on the largest science portal for amateurs in the world, Zooniverse. Your database contains Hubble file images.

They were selected in such a way that scientists can compare the time of observation and the size of the studied part of the sky with calculated asteroid orbits. In such a way they could predict the appearance of recent objects in the images.

How can we help space missions

Anyone with access to the internet can participate in the project. To start, you have to register on your site and read the rules of the work. The goal of the project is to look for the asteroid clues in the photos and mark them. The results of the work will be used by the Center for Minor Planets of the International Astronomical Union to calculate the orbits and update the asteroid ephemeris, which will help accurately predict its movement in space.

In addition, the marked data will help to train the neural networks so that they can recognize similar objects in the images automatically. 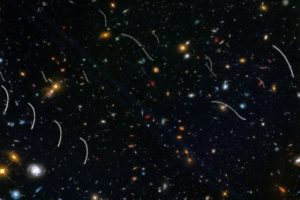 Traces of asteroids are seen as curved lines in the Hubble image presented by Frontier Fields
NASA, ESA, B. Sunnquist and J. Mack (STScI)

It is not the only project that helps volunteers approach space and astronomical studies. Previously the scientists launched another important project called AstroQuest, whose participants must verify the results of computer algorithms to highlight the limits of galaxies. The results of his work will help to understand the properties and evolution of several galaxies over billions of years.

Another project called Bennu Mappers seeks volunteers who want to help with the collection of soil from the surface of the Bennu asteroid. Participants must make a detailed map of the objects, located near the estimated area of ​​works, and mark the stones and craters. 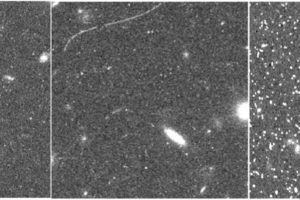 The images used in the Hubble Asteroid Hunter project.  Zooniverse