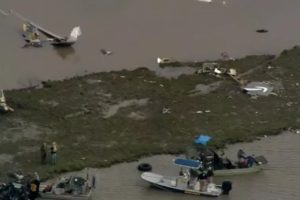 Atlas Air cargo aircraft Boeing 767-300, which is performing flight 5Y3591 on behalf of Amazon Prime Air, crashed at Trinity Bay, near Anahuac, Texas. All three crew members on board of the airplane were killed during the crash.

The cargo airplane Boeing 767-300 was performing a flight from Miami International Airport to Houston-George Bush Intercontinental Airport in Texas, but at the approach to the destination entered a rapid rate of descent and impacted the water of Trinity Bay on about 30 nautical miles East-SouthEast of the airport.

At the time of the crash, visibility was over 10 miles with scattered clouds at 3,900 ft. There was heavy rain at the scene during the landing maneuver.

After reporting about the aircraft crash at the scene were sent teams of the local fire brigade, as well as police officers and nearby fishermen. Lots of boats are searching around near Chambers, Anahuac. Thousands of debris found at the Prime Air Boeing 767 crash area.

The local authorities and FAA initiated an investigation for the root cause of the crash.

Boeing 767 is mid- to large-size, mid- to long-range, wide-body twin-engine jet airliner built by Boeing Commercial Airplanes. It was Boeing’s first wide-body twinjet and its first airliner with a two-crew glass cockpit. The aircraft has two turbofan engines, a conventional tail, and, for reduced aerodynamic drag, a supercritical wing design.