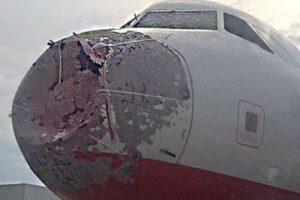 AtlasGlobal airplane Airbus A320-200 was damaged by hail storm shortly after takeoff from Istanbul-Ataturk International Airport in Turkey. The aircraft was en route to Ercan airport in Cyprus, but suffered damages in the nose radome, receiving holes from the large ice chunks. The crew decided to return to Istanbul, where successfully landed several minutes later. All the 121 passengers and 6 crew were safe, but the aircraft suffered significant damages.

Eyewitnesses say that the hailstones reached the size of a chicken egg. The hail storm damaged the aircraft: the nose cone was damaged, the windshields of the cockpit of the pilots cracked, the avionics failed. It is indicated that the landing had to be carried out, being guided through the side window of the cockpit of the pilots. Because of this, the aircraft came in for landing with a significant roll.

All the passengers were disembarked to the airport terminal and were transferred to another replacement aircraft.

Airbus A320-200 is short- to medium-range, narrow-body, commercial passenger twin-engine jet airliner. A320 is the world’s first airliner with digital fly-by-wire (FBW) flight control system: input commands through the side-stick are interpreted by flight control computers and transmitted to flight control surfaces within the flight envelope protection.

Video of the AtlasGlobal airplane Airbus A320-200 landing: