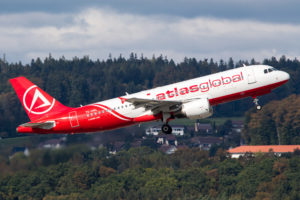 The Turkish airline Atlasglobal resumes flights between Istanbul and Makhachkala in Russia from December 26. The flights will be operated on Airbus A320 aircraft three times a week: on Tuesdays, Thursdays and Sundays.

As Assistant General Director of Makhachkala Airport Kamila Gamzatova told, Atlasglobal has already operated flights to Dagestan, however, Onur Air changed the carrier’s spring-summer schedule. At present, the flight between Makhachkala and Istanbul is interrupted.

AtlasGlobal, named Atlasjet until 31 March 2015, is a Turkish airline headquartered in Istanbul, which operates scheduled domestic and international passenger services as well as charter flights, mostly out of its base at Istanbul Atatürk Airport. The airline has 13 Airbus A321-200, 3 Airbus A320-200 and Airbus A319-100, as well as one long-haul liner Airbus A330-200.