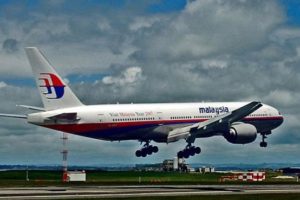 The experts of the Australian Commonwealth Scientific and Industrial Research Organisation (CSIRO) believe that they were able to calculate the location of the Malaysian Boeing 777 (flight MH370) missing three years ago in the Indian Ocean to an accuracy of 100 km. This was reported by one of the authors of the new study David Griffin. According to most experts, the aircraft is in the Indian Ocean near the so-called seventh arc, a conventional line drawn from north to south, based on data on the signals that the aircraft’s airborne systems supplied through the satellite during the first hours of flight.

The search for an airliner in the Indian Ocean, west of the coast of Australia, lasted almost three years, were conducted in the area of ​​this “line” at the level of the 36-39 degrees southern latitudes. Search in the ocean stopped, but scientists continue to conduct them in the laboratory and using computer modeling. In April of this year, CSIRO experts reported that the aircraft is in the ocean in the region of the 32-36 degrees southern latitudes, and now expressed an even more accurate forecast – the 35th latitude.

“We think we know exactly where it is”, said David Griffin at a conference on the study of the ocean in Darwin.

According to the scientist, additional light on the possible location of the airliner sheds information about ocean currents, and it was important to take into account not only where the fragments of the missing aircraft were later found. Comparison of these data indicates that the aircraft fell in the ocean in the place where the prevailing underwater currents had a north-western direction, explained CSIRO. A scrupulous analysis made it possible to narrow the zone of its possible location to one degree of latitude (about 111 km).

“We have identified a fairly small area that meets all the criteria for searches”, the scientist stressed.

Malaysia Airlines plane Boeing 777-200 operating a flight MH370 on the route Kuala Lumpur-Beijing disappeared on the night on March 7-8, 2014. Approximately two hours after departure with 227 passengers and 12 crew, the communication with the airliner was interrupted. In January 2015, the authorities of Malaysia acknowledged that the aircraft crashed, and all 239 people on board died. In the course of searches that lasted for almost three years, a vast area west of Australia with a total area of ​​120,000 sq km was surveyed, but there were no traces of the missing airliner. The search was stopped, however, the transport ministers of China, Malaysia and Australia announced that they could be resumed “in case of any new and credible information that could help determine the exact location of the aircraft”.