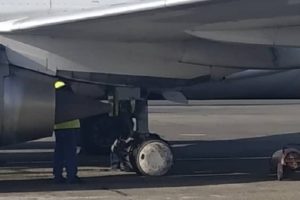 Avia Traffic’s aircraft Boeing 737-3L9 busted left-hand main landing gear tires during takeoff from Osh Airport, Kyrgyzstan. The aircraft was accelerating to takeoff from Kyrgyzstan’s airport en route to Moscow, when the the two tires burst. The pilot succeeded to stop the aircraft on time and abandoned the maneuver. There were no injuries and no damages to the aircraft.

The flight was cancelled and rescheduled, due to the busted tires.

“The pilot managed to stop the airplane in time, no one was hurt. A commission was appointed. Our inspector flew to Osh and will be investigated on the spot. The passengers are accommodated at the hotel, they will fly to Moscow in three hours. There are no complaints”, said the Director of the Civil Aviation Agency, Kurmanbek Akishev.

The accurate actions from the pilot prevented more serious accident.

Avia Traffic was not reached for comments on the accident. The investigation is under way.