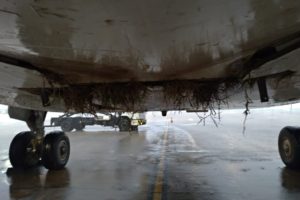 Avianca Brasil plane Airbus A320 suffered runway excursion during landing in heavy rainfall at Rio de Janeiro Galeao Airport. The aircraft was performing a domestic flight O66227 from Salvador-Deputado Luis Eduardo Magalhaes International Airport, but during landing, temporarily left the runway, but reached the parking stand by its own. The airport officials found grass in some parts of the aircraft.

Avianca Brasil confirmed the incident. According to the airline, the plane landed in Rio at 5:31 pm and the aircraft’s right wheel invaded the grass of the airport runway. There were no injuries.

At the time of landing, it was raining heavily in Rio and visibility was reduced.

Airbus A320 family consists of short- to medium-range, narrow-body, commercial passenger twin-engine jet airliners manufactured by Airbus. The family includes the A318, A319, A320, and A321, as well as the ACJ business jet. Final assembly of the family takes place in Toulouse, France, and Hamburg, Germany.