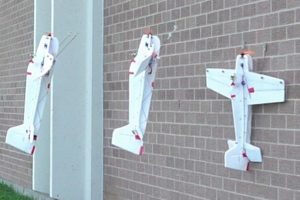 Aviation engineers from the Canadian University of Sherbrooke developed a new aircraft-type unmanned aerial vehicle capable of landing on rough vertical surfaces. As reported for landing on vertical surfaces an unmanned aircraft, called S-MAD, was equipped with projecting paws with spokes, at the end of which there are plates with claws. With these claws the drone clings to and is held on the wall.

Some researchers have previously managed to achieve some kind of the landing of drones on a vertical wall. For example, represented by Koreans in 2015, the UAV is able to press against the wall and hang for a while like this. However, in all cases, when it comes to devices capable of landing on a wall, we mean multi-copters, the design of which provides for the hovering mode. UAVs of the same aircraft type do not have this mode, because they have a speed reduction below the critical mark immediately leads to stall.

The researchers from the University of Sherbrooke developed the S-MAD unmanned aircraft, inspired by birds that can use their wings to create a lift during landing, when their speed is almost zero. In the unmanned vehicle, the principle of piloting is used, similar to the performance of the aerobatics figure “bell”. When it is executed, the aircraft is located with the bow part up, and its velocity along either axis is equal to or almost zero. This hangup is possible due to engine thrust and balance.

The S-MAD, when approaching a vertical surface, is triggered by ailerons and elevator wheels so as to take an almost perpendicular position with respect to the initial trajectory. At the same time, it first reduces the speed of the electric motor in order not to gain altitude, but to continue the general horizontal movement, and then slightly increases them to stay at the required height. The device is pressed against the wall by inertia, after which it can turn off the engine and remain hanging on the claws. Take-off occurs simply by switching on the electric motor.

During the tests, S-MAD performed 20 successful landings on a wall out of 20 attempts. At that, the device went to a vertical landing with different horizontal speeds. According to the developers, the new landing technology is useful to long-flying unmanned aircraft powered by solar panels. Such devices, having exhausted the charge of the main batteries, could sit on the walls, be charged with solar panels and fly further.

Earlier, the ability of birds to quickly quench speed and sit down inspired scientists from the British company BMT Defense Services and Bristol University. In March of this year, they announced the development of an aircraft-type drones, capable of a shortened soft landing in bird mode. This way of landing will allow “untie” aircraft drones from the runways. For example, the vehicles will be able to bird-like sit on the helipads on ships.