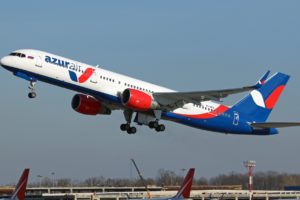 AZUR air, whose operator certificate was recently restricted by Federal Air Navigation Authority (Rosaviatsia) because of claims to maintain the airworthiness of its aircraft, intends to increase traffic and aircraft fleet in 2018.

“We introduced five aircrafts (four Boeing 737 and one Boeing 757-IF) that year. The plans for this year are for additional increase in volumes (traffic) due to the commissioning of a new fleet”, said the general director of AZUR air, Michael Hamelink, at the aviation exhibition NAIS-2018.

The press service of AZUR air clarified to Interfax that by the spring-summer season of 2018 the company plans to take two airliners – Boeing 737 and Boeing 767. Also the plans for this year include the replenishment of the fleet with a new type – Boeing 777.

As reported, last week Rosaviatsia restricted the validity of the certificate of the operator AZUR air until March 20. The decision was made after the verification that Federal Air Navigation Authority conducted in December 2017 that the air carrier’s activities revealed “inconsistencies and shortcomings regarding the maintenance of airworthiness of aircraft and organization of flight operations”.

On Wednesday, the head of the Federal Air Navigation Authority (FANA), Alexander Neradk, said that AZUR air intends to apply for lifting of restrictions already next week. The general director of AZUR air confirmed that the documents will be filed in the near future.

Azur Air is a charter airline and former regional airline in Russia. Initially it was based out of Krasnoyarsk Cheremshanka Airport, the domestic airport serving Krasnoyarsk, and its destinations were all within the Krasnoyarsk Krai. Nowadays it mainly serves leisure and some domestic destinations.