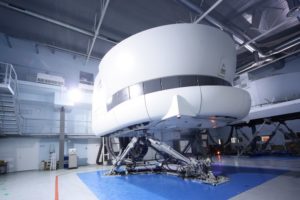 BAA Training, one of the largest aviation training centers in Northern Europe, received license by the Russian Air Transport Agency (Rosaviatsia) for the initial training and retraining of pilots for the type of aircraft of the Boeing 737 CL, as well as providing pilots with the courses necessary to update the certificate for the same type of aircraft. Moreover, this permission provides an opportunity for Russian airline operators to rent a full-flight Boeing 737 CL from BAA Training, the press service of the training center reports.

Currently, about 500 pilots in Russia have a certificate granting the right to operate aircraft of the Boeing 737 CL type. In its turn, the renewed BAA Training certificate will allow Russian airlines and pilots to update the certificates and receive training for the type of aircraft Boeing 737 CL, which meets the highest standards, in a geographically convenient location.

“Cooperation with Russian airlines has always been an important part of the strategy of BAA Training. We are very pleased that our work can contribute to improving the safety of travel by the most popular aircraft. Recently in Europe, the number of full-flight Boeing 737 CL simulators has significantly decreased, and we are pleased that we are one of several providers offering training for this type of aircraft”, said CEO of BAA Training, Egle Vaitkeviciute.

It is expected that in the near future the Russian aviation market will grow. According to the forecasts of the State Research Institute of Civil Aviation, by 2020 the Russian fleet of aircraft consisting of 579 aircraft will be replenished with another 140 new aircraft. Russian Air Transport Agency, in turn, reports that during the period from January to June 2017, the air traffic over the Russian Federation increased by almost 8%, reaching more than 850,000 flights by both Russian and foreign airlines. Moreover, passenger traffic at Russian airports has grown to 82 million people (an increase of about 19%). Egle Vaitkeviciute believes that improving performance in the Russian aviation market and world trends in general are promising for the further development of the BAA Training business in Russia.