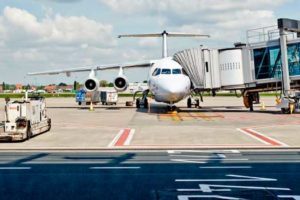 Dozens of flights were canceled at the international airport in Brussels because of the bad weather. The airport administration recommends passengers to completely abandon the trip to the airport and check in advance if their flights were not cancelled. The snowstorm caused blockage of the city and airport, where there is a snow cover of 10-12 cm.

“Brussels airport advises passengers not to go to the airport today, because of bad weather. Numerous flights were canceled”, says the Brussels airport administration. The passengers are advised to regularly consult the airline about whether the flight will be completed, supplemented in the message.

Airport staff were trying to de-ice planes and clear snow from the runways, the airport said. Heavy snow caused travel difficulties across Brussels with buses and cars skidding off roads and key road tunnels being shut.

Earlier the airport reported that due to heavy snowfall departures and arrivals are delayed. As evidenced by the electronic scoreboard of the airport, flights to Rome, Turin, Milan, London, Frankfurt, Munich, Hanover, Nice, Lyon, Vilnius, Amsterdam, Warsaw, Geneva, Basel, Vienna and Stockholm are canceled.