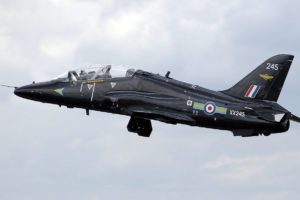 British company BAE Systems has released an updated version of the training aircraft Hawk, which is called Advanced Hawk. The debut flight was held June 7 in Wharton, Lancashire, UK. The Advanced Hawk training aircraft differs from its predecessor with the updated equipment of the cockpit, including displays, as well as a new wing that improves the flight performance of the aircraft in such aspects as turn speed, attack angles, and also in takeoff and landing modes. In addition, the new wing will allow using a wide range of weapons.

Also, to support potential offensive operations, Advanced Hawk will receive an updated defense system and other equipment. Advanced Hawk is developed in cooperation with the Indian company Hindustan Aeronautics.

BAE Systems projects a market of 300 Advanced Hawk aircraft over the next decade, which may be built in India, Britain, or both, depending on potential customer demand. It boasts a redesigned wing with an active slat leading edge and an upgraded combat flap for an improved takeoff climb and a 25% better turn rate. It is also capable of achieving supersonic speeds in a dive to provide students with experience in transonic flight.