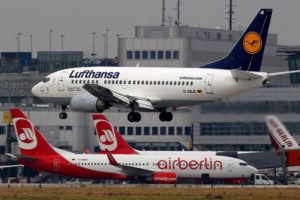 The bankrupted airline Air Berlin suspended bonus miles program. The company customers will no longer be able to exchange their “bonus miles” for free flights or special bonuses. This is reported in a statement published on Saturday on the website of the bonus program Topbonus of the concern Air Berlin.

Last week, the second largest airline in Germany announced the beginning of the bankruptcy procedure after the largest shareholder, Etihad, decided to stop financial support for the unprofitable company. To ensure the work of Air Berlin for the holiday period, the German government was forced to issue a loan to the air carrier of 150 million EUR. These funds, according to the Ministry of Economy, should be enough for three months. During this time, the destiny of Air Berlin must be decided. There is significant interest in its acquisition by Lufthansa, easyJet and Thomas Cook’s Condor airline.

Etihad owns 70% of the bonus program Topbonus, Air Berlin itself – 30%.