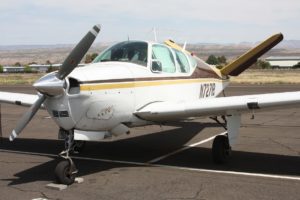 The pilot and passenger sustained minor injuries and were the only people aboard the plane. Both were transported to Mount Nittany Medical Center for evaluation.

Information on the cause of the crash was not yet available. The accident has been reported to the National Transportation Safety Board and Federal Aviation Administration. Investigation is under way.

The Beechcraft Bonanza is an American general aviation aircraft introduced in 1947 by Beech Aircraft Corporation of Wichita, Kansas. The six-seater, single-engine aircraft is still being produced by Beechcraft and has been in continuous production longer than any other airplane in history. More than 17,000 Bonanzas of all variants have been built, produced in both distinctive V-tail as well as conventional tail configurations. The aircraft has Beech J35 Bonanza has maximum cruise speed of 200 mph and maximum range of 785 miles.