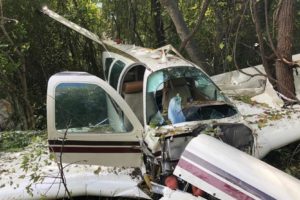 Single-engine aircraft Beech V35 Bonanza stalled while taking off from the Murfreesboro Airport and fell into the treeline at Murfreesboro Municipal Airport (KMBT), Murfreesboro, Tennessee. The Murfreesboro Airport personnel were on site almost immediately and shut off the fuel line, as there was a small leak without resulting into a fire. The pilot of the aircraft received minor injuries, but was transported by Rutherford County Emergency Medical Services’ paramedics to Saint Thomas Rutherford Hospital. The aircraft was sustained substantial damage.

“The plane literally fell from the sky as none of the fence line around the airport was broken”, said the Murfreesboro Airport Manager, Chad Gehrke.

The Federal Aviation Administration and the National Transportation Safety Board are conducting an investigation of the crash.

The Beechcraft Bonanza is an American general aviation aircraft introduced in 1947 by Beech Aircraft Corporation of Wichita, Kansas. The six-seater, single-engined aircraft is still being produced by Beechcraft and has been in continuous production longer than any other airplane in history. More than 17,000 Bonanzas of all variants have been built, produced in both distinctive V-tail and conventional tail configurations.