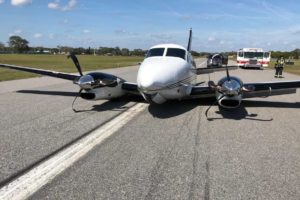 Aircraft Beechcraft B90 King Air landed on its belly at Arthur Dunn Airpark in Titusville, Florida. The aircraft was engaged in skydiving flight but suffered a problem with its landing gear, which did not lock during landing. Thus, the aircraft slid on its belly at the runway. The pilot – the only person on board – was able to land the aircraft without any further incident.

There were no reported injuries on board and on the ground. The investigation for the root cause of the accident is underway. According to preliminary information, the incident was caused by technical malfunction of the locking system of the main landing gear.

The aircraft is owned and operated by Skydive Space Center, scheduled to make another flight later during the day.

The aircraft suffered significant damages and its further airworthiness will be estimated at further stage.

Beechcraft King Air family is part of a line of American utility aircraft produced by Beechcraft. The King Air line comprises a number of twin-turboprop models that have been divided into two families. The Model 90 and 100 series developed in the 1960s are known as King Airs, while the later T-tail Model 200 and 300 series were originally marketed as Super King Airs, with the name “Super” being dropped by Beechcraft in 1996 (although it is still often used to differentiate the 200 and 300 series King Airs from their smaller stablemates).