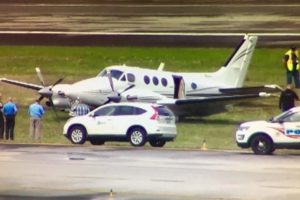 Aircraft Beechcraft C90 King Air sustained a landing gear collapse on landing at McGhee Tyson Airport (in Alcoa, Tennessee. The plane slid off the runway and ended into the grass. The aircraft Beechcraft C90 King Air was arriving from Panama City, Florida. It is currently unclear how many people were on board at the time, but no injuries were reported.

The circumstances around the accident are not yet clear and under investigation from the Federal Aviation Administration (FAA).

The runway is the only one that is currently in operation at McGhee Tyson Airport. Aircraft removal resulted in the closure of the runway for more than 2 hours, which blocked operations of the airport.