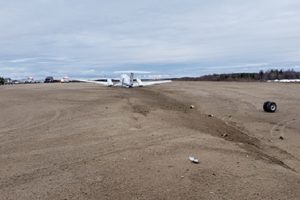 Aircraft Beechcraft 200 Super King Air made an emergency landing on the soft ground near Gillam Airport. The plane, operated by Keewatin Air, was performing a medevac flight from Winnipeg International Airport to Churchill Airport in Canada but suffered outage of both engines. The pilot attempted to reach Gillam Airport for an emergency landing, but touched down on the surface of a frozen lake, just short of the runway. It impacted the upsloping shoreline causing both main landing gear legs to separate. The aircraft continued and slid on the runway.

There were no serious injuries among the people on board. Two pilots and two flight paramedics were on board during the flight and were taken to the hospital as a precaution.

The Beechcraft Super King Air family is part of a line of twin-turboprop aircraft produced by Beechcraft. The Model 200 was originally conceived as the Model 101 in 1969, and was a development of the Model 100 King Air. The Model 200 had essentially the same fuselage as the Model 100, with changes to the rear fuselage to accommodate a new T-tail (in place of the 100’s conventional tail with all-moving trimmable horizontal stabilizer) and structural changes to allow higher maximum pressurization. Apart from the T-tail, other changes included Pratt & Whitney Canada PT6A-41 engines rated at 850 shp (630 kW) instead of the 680 shp (510 kW) engines of the Model A100 then in production, and a wing of increased span and extra fuel capacity.