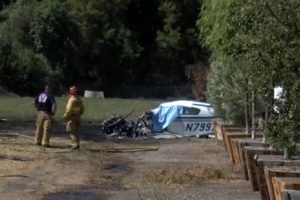 Light aircraft Beechcraft V35 Bonanza crashed near Brackett Field Airport in La Verne, USA. The airplane crashed during approach to the airport and preparing for landing. The aircraft Beechcraft V35 Bonanza clipped a tree and impacted terrain. Flames were visible and thick black smoke rose from the wreckage. The firefighters and police officers arrived immediately at the scene of the accident and extinguished the flames.

On board of the airplane was only the pilot, who unfortunately died from the injuries received in the crash.

Firefighters from La Verne and Los Angeles County rushed to the 1600 block of W. McKinley Avenue following the initial report of the crash, which came in shortly before noon.

The National Transportation Safety Board and the FAA initiated investigation for the root cause of the accident.

Beechcraft Bonanza is an American general aviation aircraft introduced in 1947 by Beech Aircraft Corporation of Wichita, Kansas. The six-seater, single-engined aircraft is still being produced by Beechcraft and has been in continuous production longer than any other airplane in history. More than 17,000 Bonanzas of all variants have been built, produced in both distinctive V-tail and conventional tail configurations.

Newer PostRussian airlines report a loss of 40.2 billion rubles in the first half of 2018
Older PostCessna 208 disappeared in the Pacific off Japanese coast