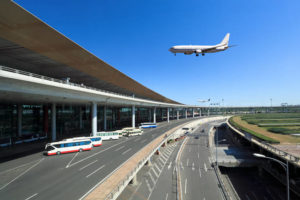 Beijing International Airport is taking another step towards becoming the busiest airport in the world. The growing number of the middle class in China and the global trend for more airplanes helped in achieving a new record of 95.8 million passengers per year.

It is currently the second largest airport in the world. And the five consecutive years of continuous growth helped it move even closer to the current number one international airport in Atlanta, USA. In turn, the US airport reported a drop in serviced passengers in 2017 to 103.9 million.

The forecasts are that China will surpass the United States as the largest air market by 2022. In order to cope with passenger growth, Beijing is building a nea giant airport worth 12.9 billion USD. It will open next year and will be able to accommodate up to 100 million passengers per year.

So Beijing will enter the exclusive club of world cities with two or even three international airports. Now it includes London, New York, Tokyo and Paris. But unlike Beijing, in other cities usually one of the airports has an accompanying role, serving only local or regional flights.

Beijing Capital International Airport is the main international airport serving Beijing. It is located 32 km northeast of Beijing’s city center, in an enclave of Chaoyang. District and the surroundings of that enclave in suburban Shunyi District.