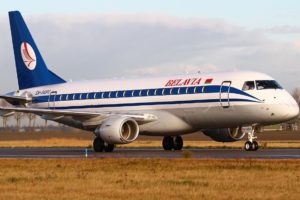 Belarusian airline Belavia concluded contracts for the delivery of three new Embraer aircraft in 2018, released the Deputy Prime Minister Anatoly Kalinin. At present, the fleet of the national air carrier of Belarus consists of 26 aircraft.

“In 2013, Belavia concluded contracts for the delivery of three more new Embraer Brazilian aircraft. The renewal of the aviation fleet will increase the comfort and safety, reduce the cost of aviation tickets, but also will open new routes”, said the Deputy Prime Minister, Anatoly Kalinin.

Meanwhile, Belavia will launch Minsk-Anapa flight in the summer season of 2018. This happens for the first time since the disintegration of the Soviet Union.