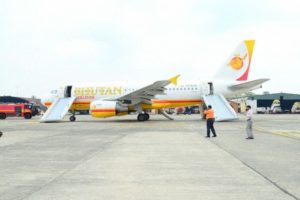 Bhutan Airlines Airbus A319 was evacuated on Kolkata Airport due to smoke from the APU. The aircraft with 80 passengers on board was preparing for departure en route to Bangkok in Thailand and taxing to the runway, when the crew ordered evacuation of all passengers after smoke appeared in the cabin. The aircraft’s doors were opened and the slides inflated. About 20 people suffered minor injuries during the evacuation, but no casualties or more serious wounds were reported. The local authorities and airport dispatchers were informed about the accident and emergency services were sent at the scene.

The rescuers noticed that the aircraft’s APU was emitting smoke. The APU was quickly secured and the smoke was stopped, hampering from extending to fire. The aircraft remains on land and will be repaired before return in service.

Airbus A319 is a member of the Airbus A320 family of short- to medium-range, narrow-body, commercial passenger twin-engine jet airliners manufactured by Airbus. The A319 carries up to 160 passengers and has a maximum range of 3,700 nmi.