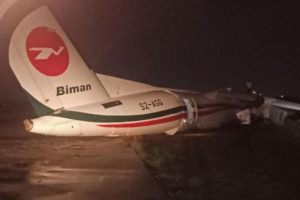 Biman Bangladesh Airlines plane DHC-8-402Q Dash 8 suffered runway excursion during landing on runway 21 at Yangon-Mingaladon Airport in Myanmar. the aircraft was performing flight BG060 from Dhaka-Shahjalal International Airport in Bangladesh with 28 passengers and 5 crew, but at the approach to Myanmar was caught by a thunderstorm and heavy rain. In such circumstances, the plane landed on runway 21 at Yangon-Mingaladon Airport, but was unable to reduce speed on time and slid off, ending in the soft ground near Terminal 3.

Following the crash, the aircraft fuselage broke in just behind the forward passenger door and just behind the rear service door. The undercarriage collapsed and the right-hand wing also seems to have broken at the attachment point with the fuselage. There was no reported post-crash fire.

The emergency services of the Yangon-Mingaladon Airport arrived minuted after the crash and assisted the passengers. There were seventeen injured people, but fortunately, no casualties reported.

The investigation for the root cause of the accident is underway. According to preliminary information, the main reason was the weather and strong crosswinds

“When he was trying to land… suddenly the aircraft jumped, went up and went down heavily”, commented spokesperson of the airline, referencing to the words of the pilot.

Aircraft DHC-8 Dash 8 is a series of turboprop-powered regional airliners, introduced by de Havilland Canada (DHC) in 1984. DHC was later bought by Boeing in 1988, then by Bombardier in 1992.