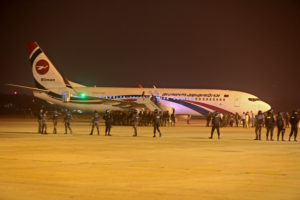 Biman Bangladesh Airlines Boeing 737-800, performing flight BG147 from Dhaka to Chittagong and Dubai with 134 passengers and 14 crew members on board, was hijacked on Sunday shortly after takeoff from Dhaka. The aircraft departed from departed Dhaka’s Shahjalal International Airport at 11:13 UTC (17:13 local time) and landed on runway 11 at Chittagong. The plane stopped on the main apron and all the passengers were evacuated, while the police and commandos attacked killed the suspected terrorist.

The commandos had asked the armed hijacker to surrender during the raid, but he rejected and tried to retaliate, which led to the exchange of fire inside the plane.

Bangladesh Army and Bangladesh Air Force officials confirmed the development at a press briefing at the airport around 8:45 pm on Sunday.

The plane did not sustain any damage and is safe for normal operations.

The authorities confirmed that the airplane was hijacked midair, soon after it took off from the Dhaka airport.

The operations of Chittagong International Airport were ceased during the raiding operations.