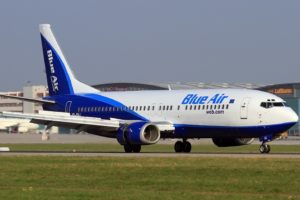 Blue Air’s Boeing 737-800 lost cabin pressure and initiated an emergency descent during a flight from Cluj (Romania) to Dublin (Ireland). The accident happened on 130nm east of Bratislava (Slovakia) in Hungarian Airspace. All the passenger oxygen masks were released and the aircraft was diverted to Bratislava for a safe landing. There no reported injuries among the passengers and the crew. Blue Air’s Boeing 737-800 landed safely at Bratislava airport and all the passengers were disembarked to the terminal.

The airline reported a sensor activated indicating the possible loss of cabin pressure. The crew reacted according to standard operating procedures, released the passenger oxygen masks.

A replacement aircraft was sent to Hungary and all the passengers reached Dublin with a delay of 5:15 hours.

The Boeing 737 is a short- to medium-range twinjet narrow-body airliner developed and manufactured by Boeing Commercial Airplanes in the United States. Originally developed as a shorter, lower-cost twin-engine airliner derived from the 707 and 727, the 737 has developed into a family of thirteen passenger models with capacities from 85 to 215 passengers.