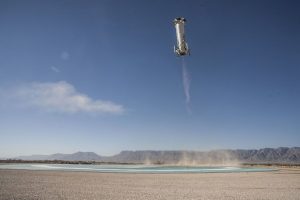 The American privately funded aerospace manufacturer Blue Origin, which is owned by Jeff Bezos, against postponed the test flight of its suborbital aircraft – New Shepard. The launch is now scheduled for January 22.

Initially, the test – the 10th in a row – was to be held on December 18, 2018. But it was first postponed to December 19 due to “problems with the ground infrastructure”, and then again to January 21. This time, the launch is “hampered by a strong wind”, according to Blue Origin.

“We have decided to push our New Shepard launch attempt tomorrow. High winds expected in the area and one vehicle open issue. Updated launch target to come tomorrow”, says the statement of Blue Origin.

All the previous nine tests, which took place in automatic mode since November 2015, did not cause any complaints. Last time the tests were done on July 18. Then the New Shepard was launched from a landfill in Texas and climbed to an estimated altitude of more than 100 km. After that, a capsule with large portholes, intended for the crew and passengers, landed on parachutes, and the carrier made a vertical landing.

The ship carried nine experimental instruments developed by scientists at a number of American universities, as well as NASA space centers staff. This includes the SFEM-2 monitor, designed to measure the carbon dioxide content, changes in pressure and speed inside the capsule during flight.

In July 2018, representatives of Blue Origin, who are directly involved in discussing the company’s pricing strategy, told reporters that New Shepard is expected to sell the seats for tourists for 200,000-300,000 USD. The ship can take six people on board.

According to sources, the very first passengers will be employees of Blue Origin.

Blue Origin, owned by the billionaire and founder of Amazon Jeff Bezos, is just one of the private companies that are going to carry out regular tourist flights into space. The same plans are being hatched, for example, by Virgin Galactic and SpaceX.