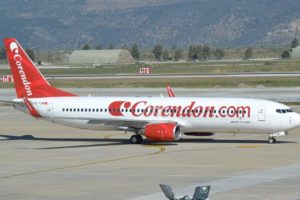 Boeing 737-800 of Corendon Airlines lost cabin pressure on 130 miles North-Northeast of Athens, Greece. The airplane was en route from Hurghada in Egypt to Amsterdam in Netherlands, when the crew received indication for problem with loss of cabin pressure. The pilot started immediate emergency descent and diverted to Antalya in Turkey, releasing the air masks for the passengers. The airplane Boeing 737-800 of Corendon Airlines proceeded to Antalya, where safely landed about 100 minutes later.

There were no reported injuries among the passengers on board of the troubled aircraft. The plane landed safely and all the passengers were transferred to replacement Boeing 737-800, which reached Amsterdam with a delay of 2.5 hours.

The troubled airplane remained on the land for further investigation and special inspection.