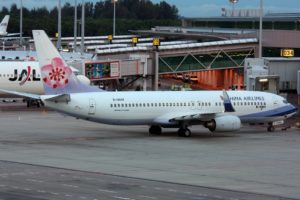 Boeing 737-800 of China Airlines lost cabin pressure on 180 miles northwest of Guam, which activated the emergency indicators and released the oxygen masks. The accident occurred during a flight from Guam to Taipei with 109 passengers and 13 crew. The aircraft returned to Guam and about 40 minutes later successfully landed on runway 06R. The safety inspectors boarded the airplane and initiated special checks and survey to assess the root cause of the loss of cabin pressure. All the people were disembarked and transferred to another replacement Boeing 737-800, which arrived at the destination with 13 hours delay.

Fortunately during the incident there were no reported injuries among the crew and passengers, as well as no damages to the plane.