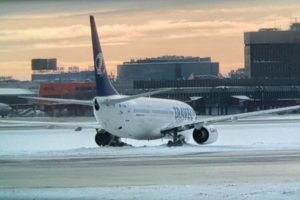 Smartwings aircraft Boeing 737-900 went off the runway at Moscow Sheremetyevo airport in Russia. The aircraft taxiing to the runway 24C, maneuvering to takeoff en route to Prague (Czech Republic) with 40 passengers and 7 crew. The airplane stuck on the soft ground between the runways, about 180 m west of taxiway 14 and 31 m south of the southern runway 24C edge. The accident caused closure of both runways during towing the airplane back.

The passengers from the Smartwings aircraft Boeing 737-900 were disembarked and carried by basses to the airport terminal.

The aircraft was towed off the runway and to the apron about 2:15 hours later.

The southern runway was re-opened about one hour after the occurrence.

The airline later reported the captain rejected takeoff due to an asymmetric acceleration of engines.

Boeing 737 Next Generation is the name given to the −600/-700/-800/-900 series of the Boeing 737 airliner. It is the third generation derivative of the 737. The aircraft features with modified wings to increase their area by 25% and span by 4.88 m. Though a thinner cross-section was created, the total fuel capacity was increased by 30%. New quieter and more fuel-efficient CFM56-7B engines were used.