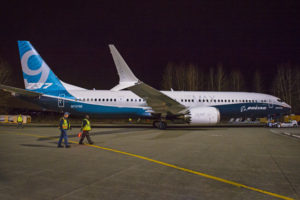 Boeing confirmed that the 737 MAX 9 test aircraft will participate in the air show program in Paris, which will be held in end of June in the Paris airport of Le Bourget. Boeing 737 MAX 9 made its first flight in April, and last month Boeing and Malindo Air marked the first delivery of 737 MAX 8. The airplane Boeing 737 MAX is the fastest-selling aircraft in the history of Boeing, as to date 87 customers from around the world have placed more than 3,700 orders for This model.

In addition, Boeing will present the 787-10 Dreamliner at the air show, which is the newest and largest model of the 787 family, boasting unrivaled efficiency. Boeing 787-10 made the first flight in March, and commencement of commercial operation is scheduled for 2018. Customers and partners of Boeing will also present a number of aircraft in Le Bourget, Qatar Airways is planning to showcase the 777-300ER with a new interior design of the business class cabin.The US Department of Defense plans to present several aircraft: patrol anti-submarine warplane P-8A, multipurpose convertible V-22, assault helicopter AH-64 Apache, and also heavy transport helicopter CH-47 Chinook.

“We are pleased to present our innovative commercial and defense products and service capabilities to customers and other key industry players from around the world”, said Marc Allen, president of Boeing International.