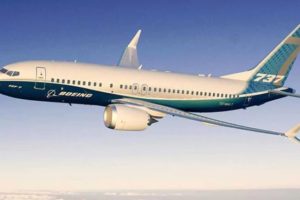 The US aircraft manufacturer Boeing wiped out more than 40 billion USD from its market capitalization after the crash of a Boeing 737 MAX in Ethiopia.

The stocks of Boeing fell by almost 18% this month. This means that the aggregate value of the securities of a corporation has decreased by more than 40 billion USD. Last year, Boeing reported sales of more than 100 billion USD.

Two weeks ago, by a decision of the US Federal Aviation Administration, the Boeing 737 MAX flights in the United States were suspended due to a plane crash in Ethiopia on March 10 that killed 157 people. The exact causes of the crash have not yet been established.

The crash in Ethiopia was the second incident with the aircraft Boeing 737 MAX in the past five months. On October 29, 2018, the Boeing 737 Max 8 of the Indonesian airline Lion Air, operating a domestic flight from Jakarta to Pangkal Pinang, fell into the Java Sea 13 minutes after departure.