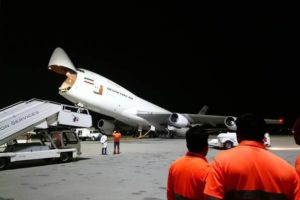 Boeing 747-281B of Fars Air Qeshm (EP-FAB) was damaged after cargo handling workers of Doha International Airport in Qatar, mistakenly unloaded the cargo from the nose of the aircraft first. The aircraft tipped nose up after the wrong discharging. The plane reportedly was carrying weapons for IRGC to Syria.

Fortunately, during the accident, there were no reported injuries among the crew and ground workers. The operations of Doha International Airport in Qatar were not affected.

Boeing 747 is an American wide-body commercial jet airliner and cargo aircraft often referred to by its original nickname, “Jumbo Jet”. Its distinctive hump upper deck along the forward part of the aircraft has made it one of the most recognizable aircraft, and it was the first wide-body airplane produced. The 747 uses a double-deck configuration for part of its length and is available in passenger, freighter and other versions. Boeing designed the 747’s hump-like upper deck to serve as a first–class lounge or extra seating and to allow the aircraft to be easily converted to a cargo carrier by removing seats and installing a front cargo door.