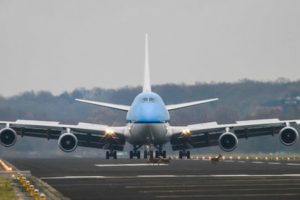 A long-haul airliner Boeing 747 with 500 Russian tourists aboard landed in Vnukovo International Airport in Moscow with one failed engine. The airplane performed a charter flight from Larnaca in Cyprus to Moscow, but during the flight one of the engines suffered malfunction and the pilot decided to turn it off and continue the approach for landing in Vnukovo International Airport.

“On board the plane there are about 500 Russian tourists from various regions of the country. In connection with the malfunction during the flight, the commander of the crew decided to turn off one of the engines, while the pilots managed to safely land an aircraft with one idle engine”, says the official statement of Vnukovo International Airport.

According to the local authorities, the crew kept the situation under control, and the technological capabilities of the aircraft allowed to get to Moscow and make a landing with one idle engine.

Boeing 747 is an American wide-body commercial jet airliner and cargo aircraft, often referred to by its original nickname, “Jumbo Jet”. Its distinctive “hump” upper deck along the forward part of the aircraft has made it one of the most recognizable aircraft, and it was the first wide-body airplane produced.