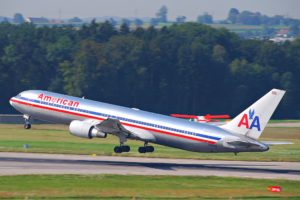 Boeing 767-300 of American Airlines suffered fumes on board during a flight AA-65 from Zurich to New York with 151 passengers and 11 crew. The accident occurred on 120 miles northwest from the Paris Charles de Gaulle airport in France and the crew took immediate action and decided to turn around and land in Paris. The airplane safely landed in Paris just half an hour later.

There were no injured passengers on board of the airplane Boeing 767-300, but two flight attendants were intoxicated by the fumes and were emergency transported to the hospital for medical treatment. Later some passengers complained from headache, but did not requested emergency assistance.

The airplane remained landed with passengers on board for about 4 hours, until the inspectors decided that flight must be cancelled. All the passengers were transferred to another aircraft.

The local authorities and safety inspectors initiated investigation for the root cause of the accident.

Boeing 767 (registration N377AN) is a mid- to large-size, long-range, wide-body twin-engine jet airliner. The aircraft has two turbofan engines, a conventional tail, and, for reduced aerodynamic drag, a super-critical wing design. Boeing 767 is a low-wing cantilever monoplane with a conventional tail unit featuring a single fin and rudder. The wings are swept at 31.5 degrees and optimized for a cruising speed of Mach 0.8 (533 mph or 858 km/h). The length of the airplane is 54.94 m, wingspan 47.57 m and wing area 283.3 sq m. The maximum capacity of the aircraft is 261 passengers.