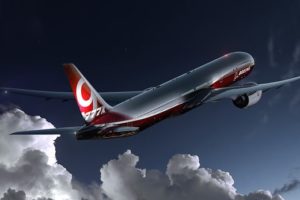 Boeing 777X will benefit from the stop of the Airbus A380 production. Earlier, Airbus announced that will stop production of its largest long-haul aircraft from 2021.

Airbus’ vision of rising airport congestion forcing airlines to adopt ever larger airplanes was undermined by the growing popularity of small widebodies. Thus, in its latest financial report, Airbus CEO announced that will stop production of A380, due to lack of orders.

Boeing’s new wide-body 777X aircraft could replace the soon-to-be-obsolete Airbus A380 and is set to dominate this market in the coming years. The 777X, described by Boeing as the largest and most efficient twin-engine jet in the world, has a wingspan of 72 m. But when on the ground the aircraft’s distinctive folding wingtips reduce the wingspan to 65 m. It promises to offer additional range and better fuel efficiency, thanks to a new wing and state-of-the-art engines.

Emirates will be the first airline to take delivery of the 777X in 2020, with Boeing largely depending on its flagship model to dominate in the wide-body jet category. This first of the new models of the 777X – the 777-9X – is the larger of two planned versions, and will have three extra rows of seats with the ability to carry 400 to 425 passengers.