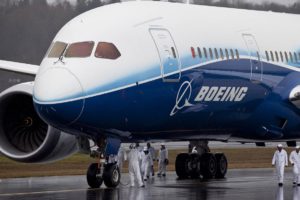 The American aircraft manufacturer Boeing delivered seven more aircraft in January of this year than the main European competitor Airbus.

Both companies have similar figures in the number of aircraft produced. In 2018, Boeing delivered to customers 806 aircraft, while Airbus delivered 800 aircraft.

However, Boeing finally retook the sales crown in 2018, bringing in 893 net orders compared with 747 for Airbus. The aerospace giants’ recently released January order results indicate that Boeing’s momentum continued in the first month of 2019. Since February 2017, the stocks of Boeing has soared 147%, a staggering result for a mature aerospace company with a (current) market capitalization of 232 billion USD.

The Boeing Company is an American multinational corporation that designs, manufactures, and sells airplanes, rotorcraft, rockets, satellites, and missiles worldwide. The company also provides leasing and product support services. Boeing is among the largest global aircraft manufacturers; it is the fifth-largest defense contractor in the world based on 2017 revenue and is the largest exporter in the United States by dollar value. Boeing stock is included in the Dow Jones Industrial Average.