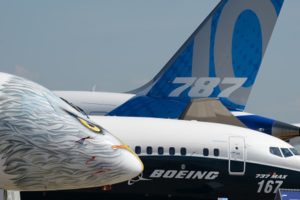 Boeing and Airbus report solid orders before the December’s rush. The world’s largest aircraft manufacturers typically engage in a mad rush to finalize as many aircraft orders as possible, as in 2017 Airbus had received more than twice as many as received in the first 11 months of the year combined.

As of the end of October, Boeing had captured 642 net firm orders in 2018, compared to 340 for Airbus. Last month, the two aircraft manufacturers roughly kept pace with each other.

Boeing reported 48 net firm orders for the month of November, bringing its year-to-date total to 690. This consisted of 51 orders offset by three cancellations.

Airbus captured 43 firm orders in November, offset by three cancellations. That gave it 380 net firm orders for the year. But the company lags behind its US competitor. However, in December Airbus announced that aircraft leasing company Avolon had placed a firm order for 75 A320neos and 25 A321neos, adding to its existing order backlog of 158 Airbus planes. This followed through on a commitment reached at the Farnborough Airshow earlier this year.