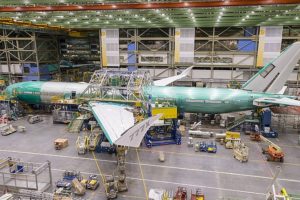 Specialists of the American aircraft manufacturing concern Boeing, together with GE Aviation, installed GE9X engines on a Boeing 777X passenger aircraft. These are the largest aircraft engines in the world, designed specifically for the newest Boeing passenger airliner.

The new engines were installed on the first flight model of the Boeing 777-9X. According to the current plans, its rollout should take place before March 2019.

The assembly of the first flight model of the Boeing 777-9X has been going on since last fall. In November 2018, the wing and fuselage of the prospective aircraft were docked, and shortly thereafter it was placed under current to check the onboard equipment. The development of the Boeing 777X airliner has been underway since the beginning of the 2010s. The new aircraft will be represented by a family that will include three liners of different dimensions: B777-8X, B777-9X and B777-9XL (B777-10X).

The development of the GE9X engine has been going on since 2012. The diameter of the fan of this engine is 3.40 m. The new engine can develop traction up to 470 kN. GE9X has an extremely high bypass ratio – 10:1. Currently, the GE9X engine is undergoing certification tests, after which the Boeing 777-9X liner can be approved for flight tests. As expected, the first flight of a promising passenger aircraft will take place before the end of this year.