Kevin McAllister, general manager of commercial aviation of the company, also lamented the problems that have generated to the airlines when determining to land that model of aircraft.

Boeing executives apologized on Monday to airlines and relatives of the victims of two crashes of their model 737 MAX in Indonesia and Ethiopia, in an attempt by the American manufacturer to recover the confidence of regulators, pilots and passengers.

“We are very sorry for the loss of life” at the Lion Air crashes in October and Ethiopian Airlines in March, Kevin McAllister , general manager of commercial aviation at the company, told reporters at the Paris International Air and Space Show. . A total of 346 people died in the accidents.

McAllister also lamented the disruption suffered by the airlines when all the MAX planes were confined to the ground after the accidents, as well as the inconvenience suffered by the passengers who planned to fly this summer.

He insisted that the company is working hard to determine what went wrong, although he did not specify when the affected planes could fly again.

Other directors of the company insisted on the manufacturer’s concern for safety and in expressing their condolences to the families of the victims.

There are several investigations in progress about what happened, although it is known that the sensors that measured the angle failed in the two aircraft, alerting a security software to force the descent of the nose of the plane. The pilots could not regain control of the planes.

Safety was a key issue in this edition of the aeronautical fair, as was the global economic slowdown and trade tensions between the United States and other powers. 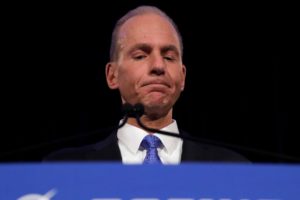 Airbus , Boeing’s main rival, expected to receive significant orders despite a year of weak sales, and was likely to present its A320 XLR long-distance model at the Paris fair.

The elite of the global aviation sector gathered at the event, where fighter jets, rockets, electric planes, unmanned aerial taxis and other state-of-the-art products will also be presented.