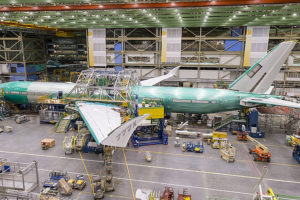 Boeing assembled the main sections of the fuselage of the first 777X, the first flight of which will take place in 2019. In production, this stage is called “final assembly of the hull”. The Boeing teams connected the central, bow and tail sections at the company’s plant in Everett, Washington.

The length of the liner is 77.00 m, taking into account the nose and tail. Thus, the aircraft is the longest built by the manufacturer.

“The 777X is a new airplane and a new production system”, said Josh Binder, vice president and general manager of the 777X. “With the 777X, the production system was integrated into the development program sooner than any other airplane, and the team is doing a great job of hitting our milestones as expected”, added he.

In the 777X design, the best characteristics of the 777 and 787 Dreamliner, which are leading in the market, were taken as a basis and improved, which will allow airlines to offer the largest and most economical twin-engine jet airliner in the world. The fuel consumption and operating costs of this aircraft are lower by 12% and 10%, respectively, than those of competing models.

The 777X achieves the unprecedented performance through the introduction of modern technologies, such as the GE9X, which is the most efficient engine for civil aircraft in terms of fuel consumption in the world, and a completely new fourth-generation composite wing design providing lift and economical operation. When unfolding the bevelled folding tips, the wing span of the liner is 72.00 m.

Due to the introduction of folding tips, the wing span of the 777X was increased, which allows improving its aerodynamic qualities, reducing engine thrust and fuel consumption. In addition, folding tips provide Boeing 777X compatibility with the existing aerodrome infrastructure for the 777 family, creating added value for customers.

“The first representative of the 777X will be the model 777-9X with a passenger capacity of 400 to 425 people in a standard configuration and a range of 7,600 nautical miles (14,075 km). Boeing takes as its basis the passenger’s favorite interior of the modern 777 and combines a completely new meaning to the concept of passenger comfort on board. Passengers will appreciate the large space, which are located higher than on existing 777 aircraft, expanded cabin space, new lighting and improved architecture. The first test model 777X for static tests on the ground was built in September 2018. Three more test aircraft will be assembled after the first test flight. The first test flight of the 777X is scheduled for 2019, and the first delivery is scheduled for 2020”, said Boeing.