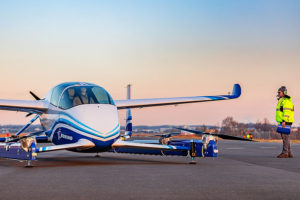 Boeing has released video of a test flight showing its autonomous passenger air vehicle lifting off, hovering for a short time before making a controlled landing, testing the autonomous functions of the vehicle and the control system.

The test flight in Manassas, Virginia, did not last long and did not include the aircraft flying forward. Boeing also did not test how the “PAV” transitions between vertical lift-off and flying forward. The prototype is battery powered and will have a range of 50 miles.

During the following tests, the transition between vertical mode and direct flight mode will be made, as well as the horizontal flight itself. This transitional stage is, as a rule, the most serious engineering challenge for any aircraft with vertical takeoff and landing.

“In one year we have progressed from conceptual design to a flying prototype”, said Boeing Chief Technology Officer, Greg Hyslop. “Experience and innovation of Boeing have played a decisive role in the development of aviation as the safest and most efficient mode of transport in the world, and we will continue to adhere to a safe, innovative and responsible approach to new solutions”, added he.

The prototype PAV is created by a division of the Boeing NeXt corporation, as well as a subsidiary of Aurora Flight Sciences, whose engineers are developing equipment for vertical take-off and landing using an electric motor.