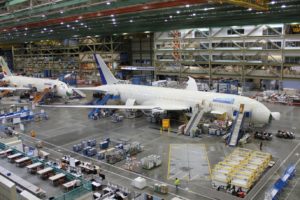 Boeing reduces staff at the fastest pace in more than a decade. In the first half of the year, the aerospace giant laid-off approximately 4% of its workforce, most of whom worked at large enterprises in Washington state. Partly Boeing relies on natural turnover of staff, some employees were dismissed, others agreed to accept compensation for voluntary withdrawal from the company.

Boeing says it should increase efficiency and more actively automate the plants in order to build next-generation aircraft. The orderbook of the company currently exceeds 5,700 aircraft.

The management of the company believes that cost cutting is the key way to maintain competitiveness. Airbus, a key European competitor of Boeing, has in recent years controlled more than half of the narrow-body aircraft market, while a balanced duopoly has been observed for two decades.

The bulk of the staff reductions occurred in Washington State, where two of Boeing’s commercial aircraft assembly plants are located. The Washington Employment Service reported that 1,251 people received notice of dismissal this year and a new wave of cuts began on July 21.

Over the past four years, Boeing has reduced the number of its employees in the Seattle area by more than 20,000 people. The scale of the cuts is being criticized by the unions, who believe that the company is losing talented engineers just at the time when it needs to increase output and move to producing new versions of its two most popular aircraft models.

The cuts also affected the plant in North Charleston, South Carolina. In February, US President Donald Trump visited this plant during the launch of the new model 787-10 Dreamliner and promised to increase the number of manufacturing jobs in the US.

However, four months passed and Boeing announced its intention to dismiss another 200 people in addition to those 700 who agreed to voluntary leave their job with payment of compensation. The number of employees at Boeing’s facilities in the Charleston area by the end of June was reduced to about 7,300, while at the end of 2015 it exceeded 8,000.