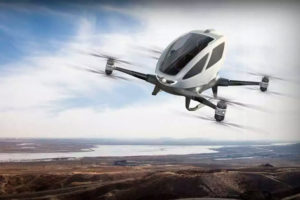 Boeing creates division NeXt, which will deal with the development of an unmanned flying taxi. The new unit will also deal with air traffic management and the creation of urban infrastructure suitable for such transport.

Boeing also announced the expansion of cooperation with the company SparkCognition, specializing in developments in the field of artificial intelligence. Last year, Boeing was among several investors, who invested 32.5 million USD in the company.

As the founder of SparkCognition, Amir Husain, said, some analysts estimate the potential market of urban air transport at 3 trillion USD.

Many large companies are engaged in development of unmanned flying taxi. So, in May, the shares travel company Uber presented a prototype of its own flying taxi and landing sites for it. Also among the companies working on the creation of a flying taxi and investing in this sphere are Airbus, Daimler, Porsche, Tencent, as well as Rolls-Royce.