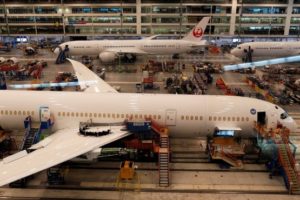 Aircraft manufacturer Boeing has announced that has been a victim of cyber attack after media reports that some of the aircraft’s production equipment could be compromised. The aircraft production and supplies are not affected. Some of the publications of the attack are “exaggerated and untrue”, according to the spokeswoman of Boeing’s commercial aircraft division, Linda Mills

“Our Cyber ​​Security Center has detected a limited penetration of malware that has affected a small number of systems”, said Linda Mills. “Measures are being taken and this is no longer a problem for production and supply”, added she.

The production lines that were potentially affected by the software problem include those of the Boeing 787 Dreamliner North Charleston and the 777X Composite Wing Center.

According to the unofficial data, Boeing was hit by WannaCry computer virus. WannaCry is a particularly vicious form of what is known as ransomware — malware that locks up victims’ computers and data with encryption, until attackers’ extortion demands are met, often in the form of the virtual currency Bitcoin.

The cyber attacks last year compromise the systems of companies such as FedEx and Nissan Motor as well as parts of the British National Health System.