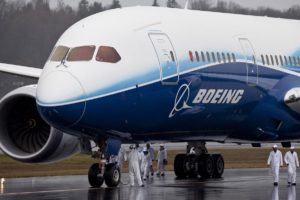 The US aircraft manufacturer Boeing may be the biggest loser in the escalating trade dispute between Beijing and Washington. China is a key market for an American aircraft builder, which may lose positions over its European rival Airbus, as well as domestic and Russian manufacturers.

The government in Beijing announced measures against the duties that US President Donald Trump has imposed on goods from China. Among the US imports involved are soybeans, cars and aircraft between 15 and 45 tonnes, which are subject to additional customs duties of 25%. For Boeing, this is bad news because China is a central market for it. More than half civilian aircraft in the Asian country were produced by Boeing, with China targeting over 25% of global aircraft deliveries last year.

The import duties will cover some versions of the Boeing 737, which is the best-selling model of the concern. According to Boeing, the market segment of short and medium-range aircraft currently dominated by Boeing 737 and Airbus A320 will reach 75% of the world market.

Boeing’s shares since the beginning of the year have lost 12% of their value. According to current forecasts, as early as 2022, China will overtake the United States as the world’s largest aviation market.

Last year, Boeing has significantly raised its 20-year forecast for China, according to which, thanks to economic growth and an increase in the middle class, is expected a boom in the country’s air travel. By 2036, China will need a total of 7,240 new planes worth 1.1 trillion USD, predicts Boeing.

Airbus shares rose initially after the announcement of Chinese duties but then surrendered to the weaker market.