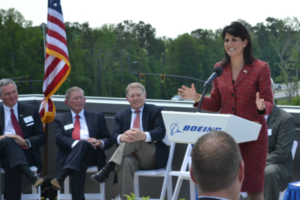 Boeing Aviation Corporation has nominated former United States ambassador to the United Nations, Nikki Haley, as a candidate for its board of directors.

“It is a great honor to have the opportunity to contribute to the continued success of Boeing, the undisputed industry leader, and a great American company”, said Nikki Haley in a statement.

Nikki Haley, who has held the position of United States ambassador to the United Nations since January 2017, announced her resignation in October 2018. She was previously the governor of South Carolina, and she fought attempts by unions to represent workers at the plant where the Chicago-based company assembles its Boeing 787 jetliners. She said that companies in her state take care of workers, and unions aren’t needed.

“Boeing will benefit greatly from her broad perspectives and combined diplomatic, government and business experience to help achieve our aspiration to be the best in aerospace and a global industrial champion”, said Chief Executive Officer of the aircraft manufacturer, Dennis Muilenburg.

Based on total compensation for Boeing’s other 13 board members, Haley can expect to earn more than 300,000 USD, well above her salary as UN ambassador.