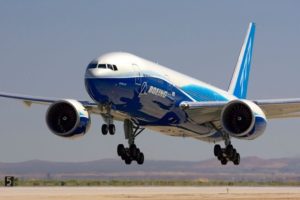 “Out of 27 billion USD that we are planning to spend on direct purchases in Russia within the next 30 years, 18 billion USD accounts for titanium purchases”, said Sergey Kravchenko. “The forecasts of the increase in the volume of titanium purchases are directly related to the forecast of the increase in the production rates of the aircraft. This will require a lot of titanium for the production of the 777X aircraft, which is planned to be commissioned in 2020. We also expect that the titanium will be in great demand for the medium-range Boeing NMA”, added he.

At the moment, the company buys most of its titanium products from Russia’s VSMPO-Avisma, which is the world’s largest producer of titanium and titanium parts. The contract expires in 2022.

The Boeing 777 is a long-range wide-body twin-engine jet airliner. It is the world’s largest twinjet and has a typical seating capacity of 314 to 396 passengers.

The Dreamliner does not contain any conventional aluminum and steel, according to Kravchenko. It is made half of advanced composites and 15 percent of titanium. Russian titanium. About fifty parts of that most up-to-date passenger liner are produced in our country.