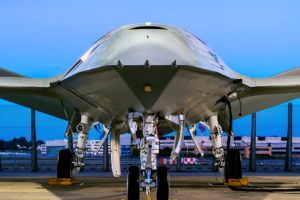 The American aircraft manufacturer Boeing has presented its own version of the prospective deck unmanned aerial vehicle – tanker, which is being developed in the framework of the MQ-25 Stingray project. According to the message of the concern, at present the device is being tested by the propulsion system, and in 2018 its deck tests will be carried out.

It is assumed that after the adoption of the MQ-25A as part of the aircraft groups, the aircraft carriers will have to release deck fighter F/A-18E/F Super Hornet from the task of refueling other combat aircraft in the air. In this case, the vehicles will be able to transport more fuel than fighters in suspended fuel tanks.

The photo published by Boeing, on which the device is depicted from the bow, gives a poor idea of ​​the configuration of the perspective device. Apparently, the MQ-25, developed by the concern, is made according to a classical aircraft scheme with a wing of normal sweep and heavily collapsed and elongated keels.

Probably, heavily inclined keels in flight will simultaneously play not only the role of stabilizers, but also of the second wing. In this case, the deflected surfaces on them, will be simultaneously rudders of height and yaw. The chassis of the device is three-post. The air intake of the engine is located on top of the fuselage behind the garage.

The fuselage of the drone is made trapezoidal in a perpendicular section. Such a scheme, obviously, allows a little increase in the lifting force arising in flight on a glider, in the type of a bearing fuselage and, at the same time, to achieve an optimal distribution of fuel tanks and the alignment of the aircraft.

It is not yet clear whether the MQ-25 will be equipped with folding mechanisms. Most likely, such mechanisms will be installed on the wings, as it is necessary to reduce the transverse dimensions of the apparatus for its compact placement in the parking area not in the deck or in the hangar of the aircraft carrier.

In the photo, the device is connected to the aerodrome power network with a cable connected to the connectors on the port side of the MQ-25. On the front rack of the chassis is a folding blocker with the flag “Remove Before Flight”. Other details about the drone are not disclosed. This is the first time that Boeing revealed any information about its deck unmanned vehicle.

Currently, the US Navy is collecting applications from companies wishing to participate in the competition for the development of a new aircraft. American companies Boeing, Lockheed Martin and General Atomics announced their intention to participate in the tender. Applications will be accepted until January 3, 2018. The results of the tender are planned to be summed up in the summer of next year.

In total, the military intends to spend no more than 2.2 billion dollars on the MQ-25 development program. It is assumed that in most cases Stingray will not be used for reconnaissance and strikes against enemy targets. At the same time, the military said that the design of the MQ-25 will still provide for the possibility of suspension of weapons and reconnaissance systems.

Earlier it became known that the American company Northrop Grumman, previously developed for the US Navy, the demonstrator of deck-mounted drone X-47B UCAS-D, refused to create a new deck unmanned vehicle. The company did not disclose the reason for the refusal. Until now, Northrop Grumman was considered the most likely winner of the future tender for the creation of deck drones.