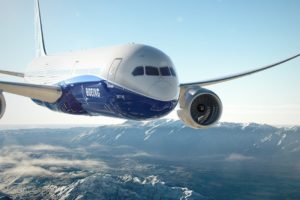 The US aircraft manufacturer Boeing has raised its forecasts for profit this year, after posting better than expected quarterly financial results. The company reported net profit of 1.85 billion in Q3 2017, or 3.06 USD per share. At the same time, the adjusted profit was 2.72 USD per share with average forecasts of analysts at 2.65 USD per share.

The revenue of Boeing increased 2% yoy to 24.31 billion USD from 23.90 billion USD, while the analysts on average expected 23.99 billion USD.

Boeing delivered a record 202 commercial aircraft in the quarter. That contributed to a a 1.7% rise in sales during the period.

“We remain focused on accelerating productivity, quality and safety improvements across the company, executing our future development programmes and capturing new business”, said the Chairman of Boeing, Dennis Muilenburg.

However, the US aerospace and defense group also announced a further 329 million USD in charges on the troublesome KC-46 military tanker aircraft program, raising the total hit, after taxes, to 1.9 billion USD so far.